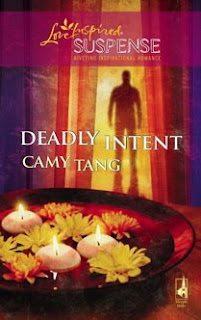 I got the cover for my July romantic suspense a few weeks ago, but I wasn’t allowed to post it until it was official released. Well, it’s officially released b/c it’s on the Christianbook.com website!

Here’s the official blurb, too:

SCENE OF THE CRIME

The Grant family’s exclusive Sonoma spa is a place for rest and relaxation—not murder! Then Naomi Grant finds her client Jessica Ortiz bleeding to death in her massage room, and everything falls apart. The salon’s reputation is at stake...and so is Naomi’s freedom when she discovers that she is one of the main suspects! Her only solace is found with the other suspect—Dr. Devon Knightley, the victim’s ex-husband. But Devon is hiding secrets of his own. When they come to light, where can Naomi turn...and whom can she trust?

You can preorder Deadly Intent, too!