Excerpt - A Cry in the Night by Colleen Coble 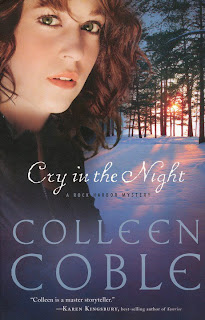 A Cry in the Night
by
Colleen Coble

Bree Nichols gets the shock of her life when her husband-presumed dead-reappears.

Bree Nichols and her search and rescue dog Samson discover a crying infant in the densely forested woods outside of Rock Harbor, Michigan. Against objections from her husband, Kade, who knows she'll become attached, Bree takes the baby in. Quickly she begins a search for the mother--presumably the woman reported missing just days earlier.

While teams scour the forests, Bree ferrets out clues about the missing woman. But she soon discovers something more shocking: Bree's former husband--long presumed dead in a plane crash--resurfaces. Is he really who he says he is? And should she trust him again after all these years?


A Cry In The Night

The baby in the carrier slept peacefully, tiny fists thrust against her chubby cheeks blissfully unaware of her danger. Pia Westola clicked off the phone and sat back in her chair, gazing at the baby, sick with the awareness of this new, undesirable turn her life had taken. What had started out as a job she could believe
in-even if it did sometimes drift into the law's gray areas-had just become clearly criminal. She would never have agreed to take this infant if what Florence had just told her was true.

One glance at the clock told her her boss would be here soon. Pia just had to keep the little one out of his reach. Adrenaline pulsed through her at the thought. Her decision made, she slipped on her coat, adjusted the insulating cover over the baby carrier that fit on her like a backpack, then grabbed the bottles and diapers
and stuffed them in with the baby. If she could hide out long enough, maybe she could get the baby to safety.

Before she reached the garage door, she heard a car out front. Peeking through the curtains, she saw him get out. His car blocked Pia's getaway. Biting back panic, she realized she'd have to escape through the kitchen door.

She exited quickly with the baby and stood on the porch. She knew she had to hurry, but which direction? Hed see her on the road. Her only hope was through the thigh-high drifts across her backyard and into the woods. Her cross-country skis were propped against the side of the house. She shouldered into the baby backpack, slung the diaper bag over that, and then snapped on her skis.

She set out across the frozen landscape. Her muscles were warm by the time she reached the edge of the woods, and her breath fogged the frigid air. But she'd reached the path other skiers had used, and the going would be easier.

Her back aching from the weight of the carrier, she spared a glance behind her. Her spirits fagged when she caught a glimpse of him. He was on skis too. She'd forgotten he always carried them in his car. He wasnt burdened with the baby either. She was
never going to make the sanctuary shed hoped for. He hadnt seen her yet though. She hoped he'd lose her tracks on the more highly trafficked trail.

Tension coiled along Pia's spine as she whirled and looked for a place to hide the baby. There-a fallen pile of logs had enough space under it to hide the infant. She slipped out of the backpack, and a crumpled piece of paper fell from her pocket. She wedged the carrier under the logs. She layered several insulated blankets around the tiny girl. At least the child was sheltered.

Picking up a branch, she erased the evidence of her tracks to the logs. She stared down the hill at the approaching figure, then retraced her steps. She met him at a bend in the trail. She'd never known him to be a violent man-maybe she could reason
with him.

His narrowed gaze nearly cut her down, "Where's the baby?"

She tipped up her chin. "Im not going to be part of this."

He grabbed her arm and twisted it. "Where is she?"

Reeling from the shock, Pia's shoulder shrieked with pain. Still, she held his gaze defiantly. "Where you'll never find her."

"I saw you carrying her!" He slapped her, then slapped her again. Both hands moved to her shoulders and he shook her. "Where is she?"

Pia's cheeks burned. Her head fopped with the violence of the shaking. Then he shoved her, and she was falling, falling toward a broken tree limb that jutted from the ground like a giant spear.