My life is no longer incomplete

Okay, that title might be a slight exaggeration, but as a writer, my life is in my hands. And my computer keyboard.

Those of you following me on Twitter know that a few weeks ago, I accidentally spilled water on my keyboard.

Captain Caffeine oh-so-sympathetically said, “Well, you shouldn’t have been drinking near your keyboard.”

But I always have water when I’m working! I drink about 10 glasses a day, more in the summertime since I sweat like a horse.

Well, I did the correct thing—I unplugged it (electrocution is not my preferred way to die) and turned it upside down. And shook it a little.

I also tried compressed air to try to get some of the water out. More drops came out that way (but this might have caused damage—see below).

Then I called Captain Caffeine in a tearful panic, which is when he uttered the wonderfully encouraging words above.

I dried it upside down for three days, then plugged it in. It still didn’t work—several keys wouldn’t work.

Then the Captain told me to try setting it in front of a fan to evaporate the water.

So I did that. For 24 hours straight.

I plugged it in again. The C key still wouldn’t work.

I dissolved into tears.

My friend Tina’s husband worked in IT, and when the tragedy first occurred, he commented on Facebook that most of the time, the keyboard won’t last long after such abuse, and it’s better to just get a new one since they aren’t that expensive.

My shtick was that I had just bought this one! Like a few months ago. Sigh ...

So I bit the bullet and ordered a new one, which finally came today!

My life is once again complete.

This is what I was doing in the meantime: 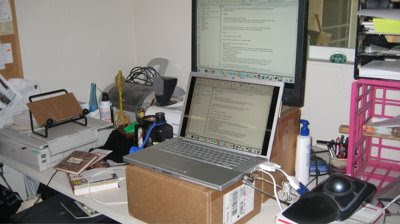 And this is the new keyboard: 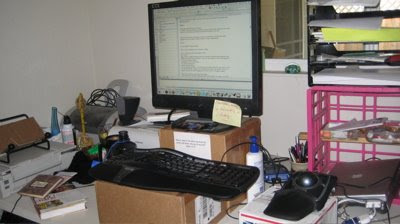 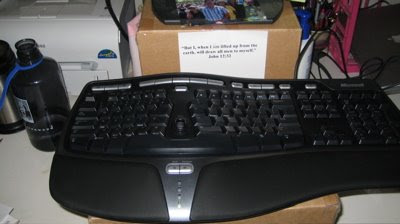