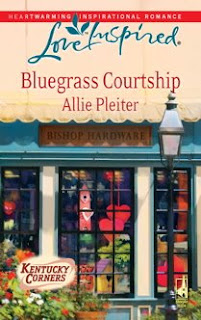 The celebrity host of TV’s Missionnovation, Drew Downing is comfortable with his fame. He’s become accustomed to the cheering, star-struck townfolk that usually welcome him as he renovates churches countrywide. Usually. Then he and his crew set up in tiny Middleburg, Kentucky, to rebuild the church’s storm-damaged preschool. The very lovely, very no-nonsense hardware store owner Janet Bishop is suspicious of Drew’s true motives. It looks like Janet Bishop’s faith—in God, in herself, and in love—needs some serious rebuilding. And Drew Downing is just the man for the job.

From RTBookreviews Magazine:
“Four Stars--With some delightfully humorous moments, Pleiter delivers an appealing romance as well as a story filled with interesting characters”

And now, here’s me and Allie!

Tell us about your Kentucky Corners series.

They are a wonderful series of four books set in the fictional Kentucky small town of Middleburg. It’s a splendid cast of characters that have been loads of fun to wield. The first book, BLUEGRASS HERO came out in July 2008, and my current book, BLUEGRASS COURTSHIP is the second in the series.

If your heroine were a dessert, what would she be and why?

Janet would be apple pie. Sweet, comfortable, often overlooked. Really good apple pie is one of life’s greatest unheralded pleasures. Plus, you can argue with yourself that since it’s fruit, it’s nutritious.

The one involving the backhoe. I’m not sayin’ one bit more…you’ll have to find it out for yourself.

Who would play your hero in a movie version of the book?

You know, I cast every one of my books as if I were casting a movie—so I know this for certain. My Drew Downing would be played by Chris O’Donnell (the guy who played Robin in the Batman movies).

What are you knitting right now?

Oh, you know how to ask the best questions! Right now I’m working on two projects for my destiKNITions blog (www.destiKNITions.blogspot.com). One is a lace sampler scarf and the other is a feather-and-fan shawl, both from yarn shops in Charleston, SC.

You're off the hotseat! Any parting shots?

Camy here: Thanks for being here, Allie!