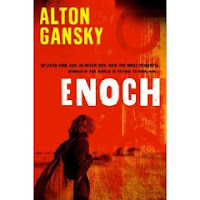 An unusual message is popping up in unexpected places around the world — in radio commercials, movies, TV shows, even within the pages of the New York Times.

Believing that someone is playing an elaborate prank, FCC agent Gene Manford and FBI agent Katherine Rooney begin an investigation. But nothing in their training has prepared them for what they are about to encounter.

A contemporary novel dealing with real spiritual warfare issues, Enoch will take you on a mind-bending, fast-paced journey through a story of good versus evil.

Alton Gansky is the author of twenty-one published novels and six nonfiction works. He has been a Christie Award finalist (A Ship Possessed) and an Angel Award winner (Terminal Justice). He holds a BA and MA in biblical studies and has served as senior pastor for three Baptist churches in California, with a total of over twenty years in pulpit ministry. He and his wife live in the High Desert area of Southern California.


He first thought of his feet.

It seemed an odd first thought, but there it was. His gaze drifted to a pair of soft-topped shoes, each with a symbol stitched to the side.

"N." He wondered why anyone would stitch a letter on footwear.

He raised a foot, then wiggled it. The shoe felt good. He dug a toe in the sandy dirt, then raised his head. A field surrounded him. No crops, no buildings, no people. Just a wide expanse of rugged scrub that shivered in the cold wind.

A full-circle turn revealed nothing but the same: miles of empty land. He blinked against the wind and the bits of dirt and dust it carried. To the west the sun lowered itself to the horizon. In the opposite direction, darkness crawled up the sky, keeping pace as if the descending orb pulled a curtain of night behind it.

Turning to face the sun again, he saw a break in the expanse of near-barren ground. At its edge ran a thin fence. He moved toward it, amused at the soft crunch the earth made with each step of his N-shoes.

Something scampered to his right. A covey of quail sprinted away and then took to the air, flying a short distance before making contact with the earth again. The sight made him smile.

Henick wrapped his arms around himself to ward off the chilling breeze. The material of his multicolored shirt felt soft against his arms and palms. He kept his gaze down, protecting his eyes from the sun's glare and looking up only long enough to get his bearings and check for holes or rocks that might cause him to stumble.

The fence was a simple series of metal stakes supporting four strands of metal wire punctuated with evenly spaced barbs. He extended a finger, touched one of the points, and frowned. The knife-sharp tip drew a drop of blood. He stuck the offended finger in his mouth. A quick scan of the fence's length revealed no gate.

A short distance from the fence ran a wide, smooth, black surface with a series of white dashes down the middle. He marveled at its unerring straightness.

He returned his attention to the fence. He wanted to be on the other side but preferred to arrive there with skin and clothing intact. Placing a hand on the top strand, he pushed down. The metal wire moved, but not enough to make straddling the thing acceptable. He tried again, this time using both hands. The wire fence gave more but still too little.

Henick decided on a different approach. He stepped to the nearest metal upright and tested it. It looked old, as if it had spent a lifetime stuck in that one spot. Seizing it with both hands and careful to avoid the stinging wire, he shook the thin metal pole. It wiggled. He leaned into it and then pulled back, repeating the motion twenty or thirty times. The metal felt cold against his bare hands, and gritty rust tinted his flesh.

When he had worked the pole loose, he lifted its base from the ground, then moved to the next upright and reenacted the procedure. With two posts loose, Henick could step across the barrier without injury.

Once on the other side, he replaced the posts, stomping the surrounding dirt with his foot until the soil was as compact as he could make it. In time, weather would reseal the posts to their original strength.

The exertion had warmed him enough to raise a film of perspiration on his brow and beneath the black hair that hung to his shoulders. The breeze found each moist area and chilled it. He could expect a cold night.

Stepping to the middle of the black path, he bent and touched the surface. It appeared smooth but felt coarse beneath his fingers. The black material radiated gentle warmth. He straightened and looked up and down the long road. It seemed to have no end in either direction. Deciding that one direction was as good as the other, Henick began to walk, choosing his course so the wind would be at his back and not in his face.

When the last of the sun's disk fell beneath the horizon, Henick had made two or three miles. He passed the time by counting the white dashes in the middle of the strange path or wondering about the letter N on his shoes. He liked the shoes; they made walking easier.

A quarter moon replaced the sun in the sky but offered little light. Soon the final light would follow its source below the distant horizon. If he had remained in the open field, he would have had to stop his journey. Walking over uncertain and irregular terrain with no light would be foolish, but the hard path with its white lines made it possible for him to continue.

Just before the sun said its final good-bye, Henick saw a black and white sign with a puzzling, irregular shape and the words Ranch Road 1232. Sometime later he saw a sign that read Don't Mess with Texas.

The air moved from chilly to cold, but the breeze had settled.

Lights and a rumble approached from behind. The light split the darkness and gave Henick a shadow that stretched impossibly long before him. He stopped and turned, raising a hand to shield his eyes against the glare.

A sudden blaring assaulted his ears, but Henick stood his ground.

The voice came from behind the glare. A large metal device pulled alongside. The words pickup truck entered Henick's mind.

The vehicle stopped. "Have you plumb lost your mind, boy? I coulda run you down and not even known I hit ya. What are you thinking?"

In the dim light, Henick could see two people seated in the truck: a man in his sixties and a woman of the same age.

"Go easy on him, Jake. He looks confused. Maybe he's lost." The woman's voice rode on tones of kindness.

"I am just walking," Henick said.

"In the dark? Where you headed?"

Henick thought for a moment. "That way." He pointed down the long stretch of road.

"Ain't nuthin' that way but Blink, and there ain't much reason for going there unless that's your home. I'm guessin' it ain't. Pretty small town; I think I'd have seen you before."

The man the woman called Jake exited the truck and eyed Henick. "It's a bit cold to be out in nuthin' but blue jeans and a flannel shirt. It's supposed to drop into the forties tonight."

"Give him a ride, Jake." The woman had slid closer to the driver side door. "We can't leave him out here. He's liable to step in some pothole and break a leg."

"More likely he'd step on a rattler. They like the warm asphalt."

"Either way, Jake, we can't leave the man out here."

"All right, all right, just keep your shoes on." Jake looked at Henick. "Turn around."

"Turn around, boy. I jus' wanna make sure you ain't packin'."

"Totin' a gun. You sure you haven't wandered off from some kinda home for the slow?"

"All right, Eleanor, I don't mean no disrespect." He motioned for Henick to turn in place. Henick did. "OK, here's the deal. I'll give you a ride, but that's all. Me and the wife were going into town for a meal. Friday night is our evening out. Been doing that for thirty-five years."

"Yeah, well, don't have no room for you up front, so you'll have to ride in the back. I got some blankets to keep the wind off you. It's the best I can offer."

"Thank you." Henick climbed into the bed of the truck and leaned against the cab.

"Blankets are behind my seat. I'll get 'em."

A few moments later, Henick, snug in two wool blankets, turned his face heavenward, gazed at the stars, and wondered what a "Texas" was.