Never Surrender: A Soldier's Journey to the Crossroads of Faith and Freedom 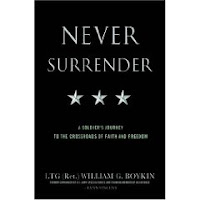 In 1978, Jerry Boykin joined what would become the world's premier Special Operations unit, Delta Force. The only promise: "A medal and a body bag." What followed was a .50 caliber round in the chest and a life spent with 's elite forces bringing down warlords and war criminals, despots, and dictators. In , his task force hunted the notorious drug lord Pablo Escobar. In , he helped capture the brutal dictator Manuel Noriega, liberating a nation. From to to , Lt. General Jerry Boykin's life reads like an action-adventure novel. Boykin's powerful story will keep you riveted as he reveals how his military duty worked in tandem with his faith to bring him through the bloody storms of foreign battle-and through the political firestorm that ambushed him in his own country.

Lieutenant General William "Jerry" Boykin served in a variety of posts during his 36-year career in the Army, most of them involving Delta Force and Special Forces. He is an original member of the Army's Delta Force. His last post was as the Deputy Assistant Secretary of Defense for Intelligence in the Pentagon, overseeing the gathering and exploitation of intelligence during the wars in Afghanistan and Iraq.

Lynn Vincent is WORLD on the Web's features editor and the blog’s managing editor. She is the coauthor of two books. She covers news and politics, and most enjoys writing stories of ordinary people doing extraordinary things. A U.S. Navy veteran, wife, and mother of two boys, she and her family live in San Diego, California.

WASHINGTON, D.C., IS A FICKLE BEAST— especially in February. In that month, the world’s most powerful city can wrap itself in sheets of ice and dare folks to step outside. Or it can flirt a little, enticing with a false glimpse of spring. During the first week of February 2003, temperatures spiked into the fifties and I saw bureaucrats braving the Beltway in shirtsleeves when I arrived from Fort Bragg for an interview with Secretary of Defense Donald Rumsfeld.

I was a two- star Army general at the time— commander of the John F. Kennedy Special Warfare Center and School at Fort Bragg— and the Army had nominated me for a third star. Here’s the way that works: Up through their second star, military officers advance in rank through promotion boards. But for any stars after that, the defense secretary has to submit a nomination to the President. Then the President has to endorse the nomination. Then the Senate has to confirm. That’s one more hoop than a Supreme Court justice has to jump through.


And Rumsfeld added another hoop: anyone nominated for a third star had to come in and interview with him personally. Which was why I made the trip to D.C. Rumsfeld was still in the media’s good graces then, which meant he was in America’s good graces. (The former, I would soon learn the hard way, is finely calibrated with the latter.) The Secretary had just overseen the U.S. military’s crushing defeat of the Taliban, the group U.S. intelligence identified as the primary backer of Osama Bin Laden’s September 11 attack. Now for some months, his attention had been tuned to a new target: Iraq. As Saddam Hussein pretended to cooperate with weapons inspections ordered by the United Nations Security Council, Rumsfeld, a former fighter pilot who served in Congress and under three presidents, sparred with the press over the Bush administration’s case for war. In the midst of all that, I walked into the Pentagon, just a routine item on the defense secretary’s daily calendar.

The world’s largest office building, the Pentagon is built in five concentric rings. More than seventeen miles of corridors wind through the place, and I truly believe a person could wander for days and never find the office he was looking for. As I made my way to the inner sanctum, the powerful “E Ring” where the Secretary has his office, I remembered my first time there twenty- five years before. I had arrived just days after Iranian terrorists loyal to the radical cleric Ayatollah Khomeini seized the American embassy in Tehran. I was a young captain then, one of the first three officers to make the cut for America’s brand-new, highly secret counterterrorism unit, Delta Force. I could recall hunkering down for days in a cipher- locked secret room off the E Ring, helping plan Delta’s first mission— rescuing American hostages from Iran. I had done a Pentagon tour since then, but those tense, smoky sessions spent calculating against impossible odds were what flashed through my mind as I headed for Secretary

His senior military aide, Lieutenant General John Craddock, showed me into a large, dark- paneled executive space with a sweeping view of the Potomac and the Capitol complex beyond. Rumsfeld kept a large mahogany desk in his office, backed by a matching credenza. But there was no chair behind the desk. That’s because he never sat down while he worked. Instead, he did correspondence and paperwork behind an elegant chart table, standing up.

“General Boykin!” said Rumsfeld, striding toward me in his customary fleece vest. He always took off his jacket in his office, but thought the air conditioning chilly and usually wore a fleece vest over his shirt and tie.

“Thank you for coming in. Here, have a seat.”

He and I sat at a small circular conference table, opposite the stretch

conference table on the other side of the room. General Craddock sat down

on a sofa nearby. Rumsfeld flipped through my service record, which, because of my

career in Special Operations and intelligence, was classified. “You have a very interesting record here,” he said. “Spent a lot of years in Delta Force.” “Yes, sir,” I said. “About thirteen.” I had been a founding member of Delta Force, and later its commanding officer.

“You’ve spent most of your career in Special Operations?”49:43 AMN

I did spend some time on the staff of the Joint Chiefs and some over at CIA, but most of my career has been in Special Ops.” With Delta, I oversaw both the rescue of CIA operative Kurt Muse from a Panamanian prison and the capture of Manuel Noriega, the brutal dictator who put him there. In Colombia, I helped hunt down the drug lord Pablo Escobar, a cruel and filthy-rich thug who terrorized a nation, personally ordering the deaths of more than a thousand people. The Secretary noted that I had also hunted war criminals in Bosnia, helped rescue hostage missionaries in Sudan, and tracked kidnappers in El Salvador. Among other things.


“You have two purple hearts,” Rumsfeld said. “Where’d you get those?”

“You know, I still don’t understand that, how Mogadishu was considered

a failure,” he said. “When you consider the statistics, it appears to me

that we won that battle.”


“Well, that’s always been an issue with me,” I told the Secretary. I felt fairly certain Rumsfeld knew that the popular version of the events—both the book, Black Hawk Down, and the movie made from it— omitted my role as mission commander. “We killed or wounded eleven hundred, but lost eighteen and had seventy- six wounded. It’s an example of how you can win a battle and lose a war because of politics.”

“Yes, I agree with you,” Rumsfeld said, smiling grimly. “We’re dealing with some of that right now.”

Exactly thirty minutes after it began, my interview was politely terminated

by the Secretary. I walked out of his office and didn’t hear another word about our meeting for weeks. I was excited about the reason for the timing of my promotion. The chief of staff of the Army, General Rick Shinseki, had offered me a plum assignment as deputy commander of the Training and Doctrine Command at Fort Monroe, Virginia. Not only was it an opportunity to work directly with soldiers again, it was in the Tidewater region of Virginia, where my brother and sister and their kids lived. My wife, Ashley, and I had long wanted to buy a home in Virginia, with space for nieces, nephews, and grandchildren. The TRADOC assignment seemed like the ideal twilight tour— a low- key but productive way to wind up what would by then be a thirty- fi ve-year Army career. I immediately said yes.


Then, in late February at a military convention in Fort Lauderdale, Army vice chief of staff General Jack Keene walked up and put his hand on my shoulder. “Jerry, Secretary Rumsfeld told me he was very impressed with your interview. You did well.”

I was pleased. All the pieces appeared to be falling into place: it looked as if I’d be promoted to lieutenant general, serve my final Army tour in a command that would leave an important legacy for future troops, and retire to a house in the country. Perfect.

Or so it seemed at the time.