Excerpt – ALL THRU THE NIGHT by Davis Bunn

All Through The Night


Davis Bunn is an internationally-acclaimed author who has sold more than six million books in fifteen languages. His audiences spans reading genres from high drama and action thrillers to heartwarming relationship stories, in both contemporary and historical settings.

Honored with three Christy Awards for excellence in historical and suspense fiction, his bestsellers include My Soul To Keep, and Full Circle . A sought-after lecturer in the art of writing, Bunn was named Novelist in Residence at Regent's Park College, Oxford University.

He and his wife, Isabella, make their home in Florida for some of each year, and spend the rest near Oxford, England, where they each teach and write. 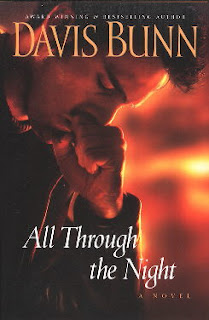 A loner, trying to forget. A community--and a woman--who need for him to remember...
Broken relationships and unfulfilled promises scatter themselves across Wayne's past like burned-out craters. His background in military special-ops is something he's trying to forget. But when he gets himself sweet-talked into helping a quirky group of seniors who've been scammed, he discovers it will take a lot more than muscle and nerve. Breach a conman's high-security estate to recover stolen money? No problem. Become part of community? Love again? Not on your life.

A lawyer with her own painful past is intrigued by Wayne and asks him to take on another unusual case--Tatanya's wealthy employer believes he's been visited by...an angel? Did a messenger from God in a pinstripe suit truly bring a divine warning, or is this merely another cruel hoax? Tatanya is willing to trust Wayne with her boss's life, but she's not sure she's ready to trust him with her own wounded heart.

With a financial analyst's skills and a warrior's tenacity, Wayne races to unmask dangerous forces hiding behind a corporate veil. But he will need all his resources--and then some--against an unseen enemy bent on destroying his fragile bid for a second chance at life...and love.

All he wanted was to put his past behind him. But now it's the only thing that will save them...

The voice was all burr and rough music, the words slanted at the edges like her eyes. Wayne thought it was silly getting a tingle in his gut, just hearing this woman finally speak. He saw in her gaze the message he had come to know all too well. The one that said, I'm not going to give you anything like what you want. Not now, not ever.

But there was nothing to be gained by letting her know he knew. So he leaned back in his chair, crossed his arms, and asked coolly, "And you are?"

"My name is my own. I will tell you only if you agree to help. Otherwise, I will leave here today and you will never see me again."

The longer she spoke, the more distinctive her accent became. A slight rolling of the r's, a musical inflection to some vowels. Try as she might to give him nothing but serious chill, the woman tasted each word in a most exotic fashion.

She made a mistake then. That is, if she intended on holding this little gathering to a totally professional level. Nerves or a simple desire to dominate caused her to rise from her chair and begin to pace.

Jerry emerged from the kitchen. Foster settled back in his chair, deeply involved in the show. The woman transformed the bare boards into a catwalk rimmed with lights and cameras.

"I represent a very important businessman. He holds considerable power in central Florida. He ..."

It was the woman's turn to take a two-armed grip upon herself. She wore a skirt of linen smoke and a matching jacket tight enough to make self-hugging a strain. But she did it anyway. She held on and she paced.

"You might as well tell him," Eilene said. "It won't get any easier."

The woman said, "He believes he has been visited by an angel."

She made two more circuits of Wayne's tiny front room before Jerry said, "Run that last bit by us again."

"You heard her," Eilene said.

"I heard the words, but I'm not putting them together well."

"An angel," the woman repeated.

"As in, guardian angel?"

"He doesn't believe in them."

Eilene said, "Guardian angel is a Catholic term. Or earlier. A lot of pagan sects hold to the concept. There's nothing in the Bible to suggest humans have individual ..." She stopped because of the look her brother gave her. "What?"

Wayne said, "Skip the history lesson and get to the now."

The woman stopped by the rear window. She said to the outside world, "He believes he has been visited by an angel."

Jerry asked, "This guy, he's a religious nutcase as well as rich?"

The woman just stared out the window.

"I've known him for fifteen years," Eilene said. "He's a friend. Yes, he lives for his faith. And no, he's not insane."

The woman said, "That's what I want you to find out."

The woman touched the glass by her face. As though wanting to assure herself of reality.

Eilene said, "Something the angel told him."

The woman corrected, "If it was an angel."

Wayne asked his sister, "You were there?"

The woman said, "I was not there either."

"But this guy, he described it to you, right? So tell me what he said."

The woman's accent grew decidedly stronger. "The angel told this gentleman that he was in grave danger and must hide himself away—his life and the lives of his family depended on it. The angel also told him to find himself a warrior. Someone he can trust to act as his arms and legs. This warrior must be one who gives his strength to the weak. One who cares little for gold."

She was Russian, Wayne decided. Or one of the break-off states with stan at the end of its name. It went with the slanted eyes and the haughty demeanor. "I don't have anything against money."

"You refused your commission," Holly pointed out.

Foster asked, "That's what you three were doing in your office before you come marching over here. Talking about how you were going to set our buddy up, see if he'd go for the money?"

Eilene said, "We had to know."

"That's right. And this is a friend in a crisis situation." Eilene vented a trace of steam with her words. "Since the incident, her boss has refused to leave his estate. He's turned his entire empire over to associates. Some of whom she does not trust."

Wayne said, "So you think one of his people used this guy's religion against him—"

"His faith," Eilene corrected. "This has nothing to do with religion."

Wayne waited until he was sure she was done, then continued, "Used it against him so they could take control of his company?"

The woman did not respond.

Wayne said, "So you want me to investigate this situation and discover who's behind the scam."

"No." The woman turned around and gave him a look of feline fear. "I want you to keep my friend alive."