Pictures from a Chinese banquet

In Sushi for One?, the first scene is a “Red Egg and Ginger” Chinese banquet. At the end of the book, the last scene is in a Chinese wedding banquet.

Both types of banquets serve similar foods. There are some dishes that absolutely must be served at one or the other—for example, when Captain Caffeine and I got married, my Chinese father-in-law-to-be said we had to have some sort of chicken dish for good luck or good fortune or something like that.

The Captain and I went to the wedding of one of his cousins about a month ago, and it was traditional Chinese banquet style food. I thought I’d share the more interesting dishes.

WARNING: NOT FOR THE FAINT OF HEART OR CHICKEN LOVERS.

First off, the fried rice dish. This was totally yummy! The rice was served or steamed in banana leaves, which gave the rice this absolutely fabulous fragrance and flavor. Isn’t it beautiful, too? 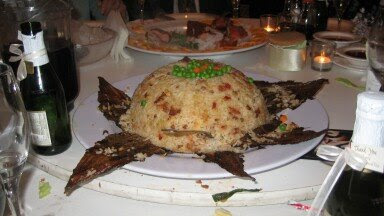 This banquet happened to be heavy on the seafood. Which was probably good, because I’m heavily allergic to crab and slightly allergic to shrimp and lobster. If there had been stuff I could eat tons of, I would have, piggy that I am.

Thing is, with Chinese banquets, I don’t know why, but they always make sure to serve the animal’s head with the dish. So even though this lobster was stuffed with some yummy shrimp paste so that it was no longer, technically, a lobster, they still served it with it’s lovely head. Staring right at everyone on the table as we spun the lazy susan around. 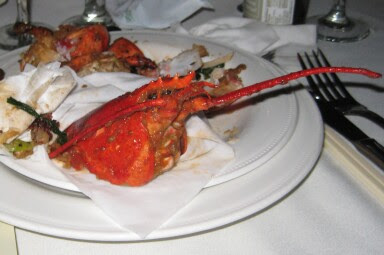 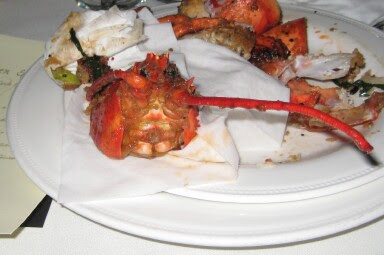 Lastly, the famous chicken dish that is required at a wedding banquet. This one was actually quite tasty, especially since I could eat more of this than the crab and lobster and shrimp dishes, but Chicken Little is, you have to admit, an unusual dinner companion. 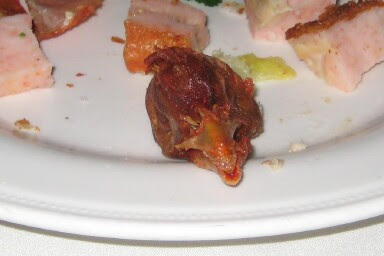 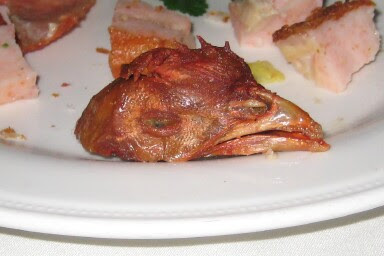 I have a sick sense of humor because I found this quite amusing rather than off-putting. Maybe because I’ve been to so many Chinese banquets and seen so many other chicken heads?

I’ll be honest, the chicken heads at banquets was the inspiration for Kazuo’s art piece that Grandma Sakai buys for the bank in Only Uni.

Now, relax, there are other dishes at a Chinese banquet that don’t involve animal heads. Boring dishes like salad with crab and shrimp, fried noodles, black bean sauce clams (my personal favorite), and abalone with Chinese black mushrooms (one of my dad’s favorites). But those pictures are just not as entertaining to me as Sebastian and Foghorn Leghorn, up there.

Oh wait, Sebastian was a crab, wasn’t he?