Okay, confession time: I have a black thumb. Don’t believe me? Here’s what’s left of the cyclamen that Captain Caffeine gave me for my birthday. 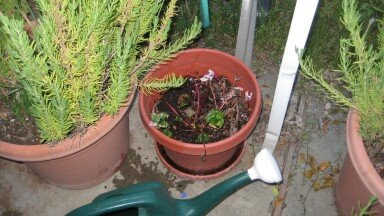 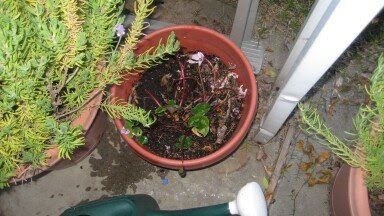 I have come to realize that the only plants I can’t kill are the ones that I don’t even bother to try to keep alive.

For example, my lavender is flourishing. Although considering how hard it is to kill lavender, maybe that’s not a good example. After all, lavender can grow from just tossing some cuttings on the ground, because you can plant the stems and they’ll root.

Anyway, my correction: bearded irises (thanks, Ausjenny!) are flourishing this year. Why? I have no clue. They are my “happy accident” plants.

Here is the key to my keeping plants alive—I can’t have been given them, bought them, or planted them. I didn’t plant the gladiolas—they were growing in the yard when we bought the house, and I could tell they weren’t weeds, so I told Captain Caffeine not to mow it down.

I watered it when I remembered to. Nothing happened all year (we bought the house in February). Then the following March, I had one stalk with two small flowers.

They seem to like my sporadic watering, because they’ve gotten more bulbs and lots more flowers, after almost eight years. 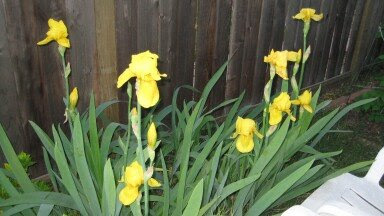 How about you? Any gardening/plant-killing stories?