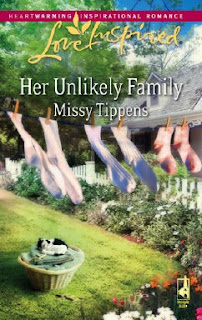 Take responsibility for his orphaned niece, yes. Raise her himself, no. A good boarding school was what the girl needed, not an uncle who was never home. But then Michael Throckmorton's niece ran away. And the big-hearted, beautiful diner waitress who'd taken her in wasn't letting her go so easily. Josie Miller had a few conditions for Michael. Oddly enough, he was willing to listen. Yet days later, why wasn't he hauling the teen back to school and himself back to the city? Could it be that an unlikely family was forming?

And now, here’s me and Missy!

What's your favorite scene from your novel?

If your heroine were going out for a night on the town with her girlfriends, where would she go, what would she eat, and why?

She would go somewhere fun, like maybe somewhere to sing karaoke. And she would like some real down-to-earth food, nothing froufrou. She would probably want to take her friends by her workplace, Bud's Diner, for one of the world's best hamburgers. Of course, she would be doing so to check on the owner, Bud, to make sure he's doing okay without her.

My oldest would be a lab puppy named Buddy, and he would be running around acting playful and crazy with his tongue lolling out. (Don't tell him I said that!! LOL) My middle child would be a dog named Einstein--curious, smart, taking things apart (chewing them up) to see how they worked, and very loyal and sweet. Don't know what breed that would be, though! My youngest would be a sweet, loving lap dog named Jennifer (her favorite name right now). She would love to be pampered but would also have a playful streak. Oh, and she would love to be walked so she could socialize with other dogs. :)

What novels are you reading right now?

I just finished Cheryl Wyatt's A Soldier's Promise (Great book!). And just started Jenny Crusie and Bob Mayer's Don't Look Down. Julie Lessman's A Passion Most Pure is on the way here from Amazon. That's next on my list.

...sculpting. You get to mold the world (your character's world) to be just the way you want it to be--happy ending and all.

This was fun, Camy. Thanks for having me! I feel like I've been through a creative writing workshop! :)

I do want to say to anyone reading that I absolutely loved Camy's book Sushi for One? Such a fun book, but touching as well.