Writers write in all kinds of ways. My way happens to involve lots of Post-It notes and my closet doors.

This is my brainstorm for my new novel proposal. I’m pretty excited about it, because it involves dogs. :) 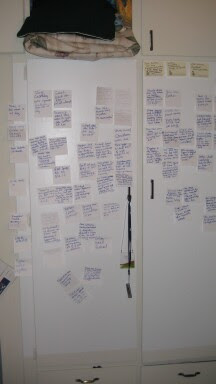 Anyway, you can see that it’s kind of like a bunch of Post-Its hit exponential cell growth. Oops, sorry, I lapsed into biologist-speak. Well, you can obviously see my Post-Its exploded.

I just stand there with Post-Its in one hand and a Sharpie in the other and start scribbling ideas and sticking them on the wall. Sometimes I group ideas together like a big amoeba, other times I put random ideas wherever there’s space.

Later, I’ll go through and discard what I don’t like. But while I’m brainstorming, I try not to cull ideas—I just come up with as many as I can, one after the other.

I finished this proposal last week, so now I’m going to clean these off and stick them on notebook pages for storage. Then I’ll Post-It all over the place for my next proposal!