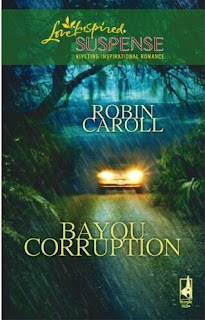 "Don't let them get away with it, Jacks—"

Those were the sheriff's last words. Left for dead in the middle of the road, Jackson Devereaux's good buddy had slipped into a coma. Well, Jackson wouldn't let them get away with it, once the ace newspaper reporter uncovered who they were.

He'd start with the lovely Alyssa LeBlanc, the only eyewitness to the crime. Problem was, she hated Jackson—why?—as much as she hated being back in the Louisiana bayou.

Unfortunately, the truth lay deep in the bayou's belly. And whether they liked it or not, Alyssa had to lead the way.

I like this book even better than the first in the series, Bayou Justice! I’m not sure why, but I like the heroine, Alyssa, better than CoCo from the first book. I don’t really relate to Alyssa’s job as a newspaper reporter, or her hatred of her home, or her personality, which is elegant and no-nonsense. But something about her is appealing to me as a reader, and I was immediately sucked into the story.

Like her sister CoCo, Alyssa is a strong character who doesn’t take guff from anyone. She’s a perfect foil for Jackson, the hero, who is also a reporter and more than a match for Alyssa’s sass.

The story has hairpin turns that kept surprising me. The pacing of the story was excellent, too—I felt like the action started with a bang and never let up.

As with the first book, the culture of the bayou pervades every character, every scene, and I felt like I was on vacation in Louisiana with a close friend to both expose me to the culture and explain it at the same time. The setting itself is a character, and I loved the town, the food, the atmosphere of Lagniappe.

This is a fabulous novel for readers of all ages. The junior high girls in my church youth group will love this story, because the heroine is feisty and the hero is dashing, and the mystery and suspense kicks the romance up a notch.