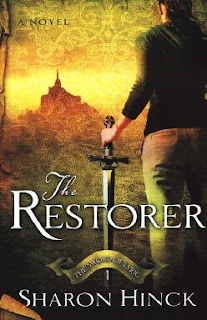 The Restorer (The Sword of Lyric, book 1) by Sharon Hinck

Book One of The Sword of Lyric series has garnered critical praise for its unique blend of fantasy genre and contemporary women's fiction voice, and went into a second printing only a few months after releasing. The story unfolds the adventure of a modern-day mom pulled through a portal into another world where a nation grappling for its soul waits for a promised Restorer.

To read a chapter of this exciting new title go to ChapteraWeek. If you don't belong to Chapter a Week, it's free and easy to join. Just click here.