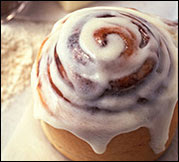 All I can say is, I’m in such trouble.

I have discovered this bread machine recipe for cinnamon rolls. It is incredibly easy (I even substituted ¾ cup water and 2 T dry milk with ¾ cup milk instead, to make things even easier for me).

It took 5 minutes to throw the ingredients in the bread machine. It took only 10 minutes to roll the dough out (it was incredibly malleable and easy to roll) and slather it with the cinnamon and sugar and butter paste. I popped those suckers out of the oven after only 20 minutes bake time and drizzled with icing made with powdered sugar, hot water from my electric hot pot, and butter melted in the microwave.

They were SO GOOD.

Notice the past tense. Yup, there is only one roll left, and that’s for Captain Caffeine’s breakfast. I made these on Tuesday and today’s … Thursday? We’re completely addicted. I don’t even want to think about the number of calories in each one.