The Sword of Shannara movies 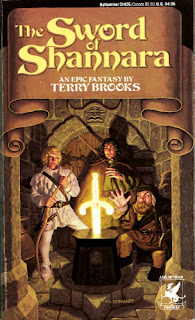 I just read this in Publisher’s Lunch, and it got me so excited!

Film deal:
Terry Brooks' SHANNARA fantasy series to Warner Bros., with the second book The Elfstones of Shannara viewed "as the most likely jumping-off point for the film stories."

Can you believe it???? Movies of the Sword of Shannara series! Wootwoot! I totally loved the Shannara books when I was in high school.

If Warner Bros. does an even halfway decent job of it, they could be the next fantasy phenomenon like Lord of the Rings!

Of course, I know that news of the deal doesn’t mean the movies will actually go to production. Many a slip ’twix cup and lip, as they say. But how cool if this does happen!

Is my geeky Sci-fi/fantasy side showing?