Okay, so I just tried knitting two socks at the same time on two circular needles. This was supposed to make things easier and faster because you’re knitting them simultaneously instead of one at a time on double pointed needles.

I had no problems getting the concept of it, which is actually quite clever. There were lots of resources on the web for how to knit two socks on two circs.


Update: Because of requests for them, here are the websites I used:

Cast on for two circular needles

How to knit small circumferences with two circulars

Cybersocks: 2 Socks on 2 Circulars online class (some of the pictures were very confusing to me because I think she flipped the needles a few times, but this was very helpful to teach me the technique.)

So, while the concept is brilliant, I’ll stick to my double pointed needles, thanks.

Oh, and another thing I just realized—according to the pattern as written, the sock is looking a little big for me, so if I have to tear it out to try to resize it, I’ll only be ripping out one sock and not two! 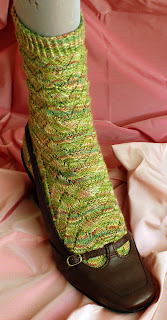 Right now, I’m working on another pair of socks for myself (so I’ll have these ready to wear by the time autumn comes around). I’m using Cape Cod Memories yarn in the Monkey socks pattern from Knitty.com. I think this will turn out great.

Here's a picture of my unfinished Monkey sock: 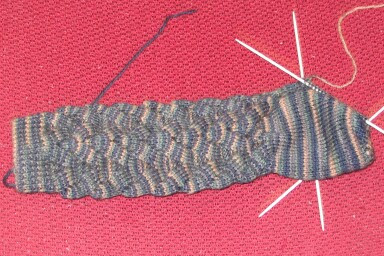