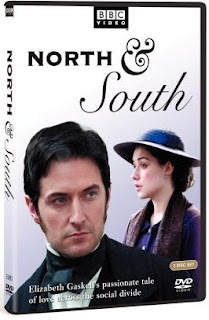 WOW! I’m so glad Rel suggested this miniseries from BBC.

I’m not even going to go down the scoring because all aspects of it were great. Costumes were beautiful and just varied enough to be interesting, but not so much as to stand out and make me wonder that the heroine kept getting new clothes. The camera/filming was as professional as the BBC/A&E version of Pride and Prejudice, and the musical score was absolutely gorgeous.

I liked the actors a lot. Richard Armitage plays the hard, yet romantic hero with as much aplomb as Colin Firth. He’s got those brooding eyes and stern jaw that were perfect for the character, and he’s mighty fine to look at, too! LOL (Just kidding, Captain Caffeine!)

The actress who played the heroine reminded me of a younger, British, and slightly shorter Angelina Jolie. She also was normal in terms of body type, which was refreshing to see and made her seem more likeable and believable.

I haven’t read the book by Elizabeth Gaskell, so I can’t say anything about the accuracy to the original story, but the storyline and script were very well done. I was a little annoyed at the heroine’s naivete at times, but it was very in character, so I can’t complain too much.

The ending was incredibly romantic and very satisfying! I loved it.