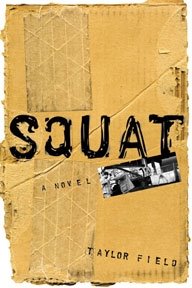 In the shadow of Wall Street’s wealth, homeless citizens with names like Squid, Saw, and Bonehead live in abandoned buildings known as "squats" where life is hand to mouth, where fear and violence fester. The light in lovable Squid’s obsessive-compulsive mind’s eye is Rachel, a loving soup kitchen missionary who tells him about faith and unfaith, hypocrisy and justice, the character of God and finding identity in Him.

But among the squats and so many other abandoned lives, will such talk be enough to make Squid believe that his life may actually amount to something?

All author proceeds from Squat will go to Graffiti Community Ministries, Inc., a service arm of the East Seventh Street Baptist Church on the Lower East Side of Manhattan where Field preaches.

This is one of the most unique books I’ve read this year. The author plunges the reader deep into a world as foreign as another country, which exists right within the inner city.

The different characters are colorful and very original. Even the volunteers at the local mission are drawn with a fine hand.

Jason, overzealous and religious, is shown to have a deeper, stronger side. Unc, dirty and rambling, reveals his strong opinions and deep intellectual mind. Saw, at first simply a delinquent, deepens in his evil as the main character, Squid, tries to avoid him throughout the course of the novel.

Squid is too much like how I can imagine hundreds of other children end up on the streets. A more passive personality, abused, a runaway, OCD—his character is sad, richly colored, sympathetic.

Emotionally, it was harder for me to feel the characters, but events unfold with gentle clarity and the pace ramps up as the novel progresses. Even though it’s a new world, I was never confused about what was happening.

This is a very interesting novel that will open readers’ eyes to the realities of the homeless. More importantly, it shapes the attitudes and motivations of Christians who’d like to help.

I think this book would appeal to Christian teenagers and 20-somethings (or even older) and encourage a heart for inner city ministry. The post-modern generation is a generation of do-ers, and this novel both shows reality but also gives hope.