MURDER, MAYHEM, AND A FINE MAN by Claudia Mair Burney 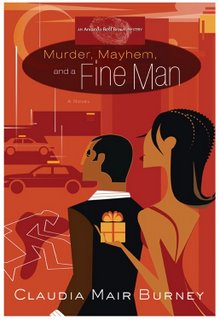 For Amanda Bell Brown, turning forty is murder! How's a woman supposed to grapple with romance and faith when she finds herself in the middle of mysteries--and not the God kind?

Life as a forensic psychologist isn't quite as cool as prime-time television would have us believe, and most of us just don't have closets full of red-carpet gowns and bling. Instead of painting the town red in a drop-dead gorgeous dress, this boring therapist finds herself at the scene of a crime.

Amanda Bell Brown just may know who the killer is. She needs to spill her guts, but not on the lead detective's alligator shoes. A complicated murder investigation unearths not just a killer but a closet full of skeletons Amanda thought long gone. Murder, mayhem, and a fine man are wrecking havoc on her fortieth birthday, but will she survive to see forty-one?

What a cool story! This novel has lots of sass and a terrific storyline.

I loved that the heroine is 40 rather than a perky 20-year-old. The book explores some of the issues that older single women have to face, and Bell's maturity also brings a solidity to the character rather than a ton of emotional flightiness.

The dialogue rocks! Jazz and Bell's interactions are hilarious. The romantic tension is definitely there and sizzling, and the story showed not a perfect romance where everyone behaves, but a realistic romance where two people are attracted but they're trying to do the right thing and not always succeeding. It made both characters very sympathetic to me.

It was hard to see things from Jazz's point of view at times, and I really wanted to slap him for being so inconsistent with his actions and words. At first I didn't quite understand Jazz's spiritual and romantic conflict, but then I realized that it is there and is, in fact, a hot issue in the church. I'm very glad Mair is addressing that with this series, showing both sides of the issue.

The story gives a huge eye-opening look at cults, but also with a slightly analytical perspective from Bell, who is a forensic psychologist. It was fascinating and yet saddening at the same time.

The story really shows the power of prayer and the power of God even if He's not there with bolts of lightening or "mysterious circumstances." Like the book of Esther, God is evident even if nothing "supernatural" happens onstage.

Very entertaining storyline and complex characters. I can't wait for the next book to come out.