Today I have a guest blog from author Jack Cavanaugh, whose novel with Bill Bright released this month. He also wrote Fury, the next book in the Great Awakenings series set in 1825-1826: 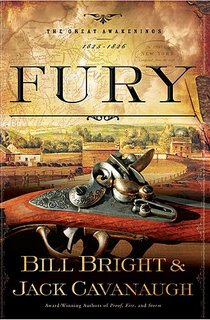 HE JUST WITNESSED A MURDER...AND NOW THE KILLER IS ON HIS TRAIL. BUT NO ONE WILL BELIEVE HIM!

Daniel Cooper: the son of a famous preacher, he’s running from more than “religion.”

Hannah Robbins: a spunky farmgirl and someone’s “intended”...but could she be what Daniel needs?

Cyrus Gregg: an esteemed businessman, he’s after two things. And he’ll do anything to get them.

Ever since his parents drowned while crossing the Atlantic after a revival, Daniel Cooper has felt as if the world is out to get him. For the past year he's had to live with his Uncle Asa and Aunt Camilla -- and all their rules. One night, deciding he's had enough, Daniel sneaks out his bedroom window and flees to the alley behind his employer's casket shop. What he sees there shocks him to the core.

Pursued by two men, Daniel embarks on an agonizing journey...through deceit and betrayal. A journey that will test his physical stamina and challenge his understanding of God and friendship. A journey that may well change his life...if it doesn't kill him first.

Read an excerpt on Amazon.com’s Search Inside! 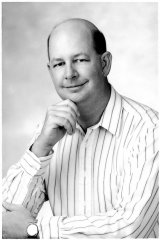 This is going to sound self-serving. It isn’t intended to be that way. Maybe it would help if you understand that even though I write novels full-time and am no longer the pastor of a church, I am still in the ministry.

My call to ministry was to communicate God’s truth to the present generation. At first, that meant preaching, and preaching meant the pastorate. I was good at the preaching, not so great as a pastor. One thing I noticed while preaching is that people would remember the stories I told long after they forgot my carefully crafted three point sermon.

So I began collecting stories that communicated God’s truth in a powerful way. I discovered that they had three things in common: strong visuals, emotional punch, and they made good sense.

So when God opened-wide the doors for Christian novels to be published, I began writing longer stories, but my goal remained the same. In every story my characters discover the theme of my ministry: God’s ways are always best.

Most recently, I’ve been blessed to co-author four stories with Dr. Bill Bright of Campus Crusade for Christ. He caught the vision of the power of story to communicate God’s truth. While working together, he told me, "Jack, if I had known the power of the novel, I would have started writing them earlier in my ministry." He and I shared two passions in common: story and a desire for revival in America. The result is the Great Awakenings series which tells four incredible stories of how God visited our land with revival. It is our hope that these stories will ignite the prayers of believers asking God to do it again.

Over the years I’ve learned that people will read a novel (my stories) long before they’ll ever come here me preach. And they’ll more readily accept the loan of a novel from a friend more quickly than an invitation to come to church.

By writing novels my ministry has gone from a local pastorate to an international audience. The world is my pulpit.

When Russia emerged from its dark days of Communism, to the world’s surprise we learned that the church in Russia had survived it all. When asked why, one man explained, "They took away our Bibles, but they didn’t take away our great Russian novels. It is in them we found God."

So, where does the self-serving part of this blog come in? Read Christian fiction. The stories that touch your heart, pass along to a friend, or give away as a gift, or simply leave the book lying around in the lunchroom. A good story will open up dialogue. A good Christian story will convince readers that God’s ways are always best.

Camy here: Thanks so much, Jack! This was very inspiring, especially for me as a Christian novelist.