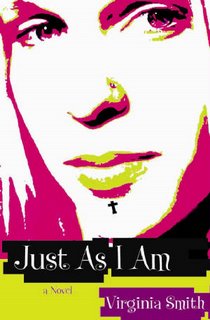 Continuing my interview with Ginny:

What's your writing schedule like? How do you ensure time for family and church?

Since I was lucky enough to quit work last summer (Thank you, Lord!), I write during the day. I do a Bible devotional and pray first thing in the morning, then read e-mail and perform any marketing activities I’ve planned for the day, like contacts to media or sending bookplates and bookmarks to readers. Then I start writing and write pretty much all day long. My daughter and I go to the gym around 4:00 or so, and I try to stay away from my office after that. I really do give my day to the Lord each morning and ask Him to arrange my activities according to His will. Since I know He takes an active role in guiding my life, I believe He does just that.

What is your most memorable moment as a writer?

It was during the writing of Just As I Am. I had a character who was absolutely furious with Mayla for becoming a Christian. Mayla couldn’t figure out why Sylvia was so angry, and I couldn’t either. I kept asking the Lord, “What is her problem?” And then one day as I sat at the computer the reason for her anger became suddenly clear in one of those stunning moments of revelation. Sylvia was me! Sylvia’s anger at the Lord was my own, resolved, but still vividly remembered. I worked through my anger long ago, but I realized there were people who would read this book who suffered the same things and hadn’t yet worked it out with God. And in order to know what I’m talking about, you’ll just have to read the book.