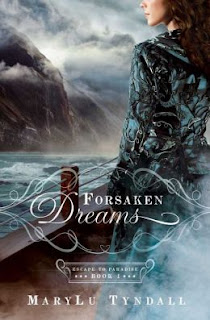 The winner of the autographed copy of
Forsaken Dreams
by
MaryLu Tyndall
Is:
Linda C.
Congratulations! (I've emailed you. Please email me at camy {at] camytang[dot}com if you didn’t get the email message.)

I know the rest of you are crying in your shrimp and grits that you didn’t win. Cheer up! Order the book!

Embark on a seafaring adventure in a brand-new series from bestselling author MaryLu Tyndall. After witnessing the death and destruction caused by the Civil War, Colonel Blake Wallace is eager to leave his once precious Southern homeland for the pristine shores of Brazil and the prospect of a new utopian community. Widow Eliza Crawford seeks passage on Wallace’s ship harboring a dirty secret—and a blossoming hope for a fresh start. But will dangers from the sea and from man keep them from the peace and love they long for?

To obey is better than sacrifice.
1 Samuel 15:22
Dedicated to every Jonah running from God.
Cast of Characters
Colonel Blake Wallace—leader and organizer of the expedition to Brazil and a decorated war hero wanted for war crimes by the Union. He suffers from post-traumatic stress disorder.
Eliza Crawford—widow and Confederate army nurse who signed on to nurse the colonists, married to a Yankee general, and disowned by her Southern, politician father.
James Callaway—Confederate army surgeon turned Baptist preacher who signed on as the colony’s only doctor but who suffers from an extreme fear of blood.
Hayden Gale—con man who has been searching for his father to execute revenge for the death of his mother. Believing the man is heading toward Brazil, Hayden stows away on board the New Hope.
Angeline Moore—signed on as the colony’s seamstress, Angeline is a broken woman who wants more than anything to put her past behind her. Unfortunately, there are a few passengers on board whom she recognizes from her prior life.
Magnolia Scott—Georgia plantation owner’s pampered daughter who doesn’t want to go to Brazil and will do anything to turn the ship around. Constantly belittled by her father, she is obsessed with her appearance.
Mr. and Mrs. Scott—once wealthy plantation owners who claim to have lost everything in the war, yet they still retain their haughty, patrician attitude toward others. They hope to regain their position and wealth in Brazil.
Sarah Jorden—seven months pregnant and a war widow, she signed on to teach the colony’s children.
Wiley Dodd—ex-lawman from Richmond who is fond of the ladies and in possession of a treasure map that points to Brazil as the location of a vast amount of gold.
Harman Graves—senator’s son and ex-politician from Maryland whose hopes to someday run for president were crushed when the South seceded from the Union.
Captain Barclay—old sea dog who was a blockade runner in the war and who captains and owns the ship New Hope.
Parson Bailey—signed on as the colony’s pastor and spiritual guide.
Emory Lewis—the colony’s carpenter who took to drink after losing his wife and child in the war.
Moses and Delia—a freed slave and his sister who, along with her two children, want to start over in a new land away from the memory of slavery.
Jesse and Rosa Jenkins—simple farmers who, with their young daughter, Henrietta, hope to have a chance at a good life away from the ravages of war.
Mable—slave to the Scotts.