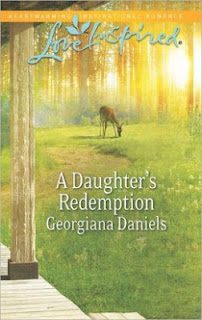 Today I’m giving away an autographed copy of A DAUGHTER’S REDEMPTION by Georgiana Daniels!

Inheriting her estranged father's property isn't the reason Robyn Warner wanted to come back to Pine Hollow. She thought she'd make amends with her father—but his sudden death made that impossible. And when she learns the identity of the handyman fixing the run-down cabins, Robyn is ready to flee Pine Hollow again. Caleb Sloane, the cop responsible for her father's accident, just wants to uphold his promise and then return to the force. But he can't seem to walk away. After all, he understands about guilt and regret. And he'll do everything he can to help Robyn find healing, happiness and—just maybe—a lifetime of love.

5) You get extra entries into the contest if you get someone else to join my email newsletter. Just email camy {at] camytang dot com with the person’s email address (new newsletter sign-ups only).

6) In the comments section of this blog post, let me know if you joined/already belong to my email newsletter, Facebook page and Goodreads group, and if you follow me on Twitter. Also please list the email address you used to sign up for my newsletter (please use this format--you [at] yourmail.com--or something like that to prevent spammers from trolling for your email address) OR if you're not comfortable posting your email, just email me at camy {at] camytang dot com with your entry.

I always email the winner and give him/her a week to reply, but if I don’t receive an answer, I will pull another person to win the book. It is the winner’s responsibility to check to see if you won and to email me if you haven’t yet heard from me. I am not responsible for a lost opportunity if you misspelled your email address, are on vacation, or leave an email address you don’t check frequently.

Sorry, I’m limiting this to the US and Canada only because it’s too expensive for me to ship books internationally.

Don’t want to wait to see if you win? Order the book through one of the links below: