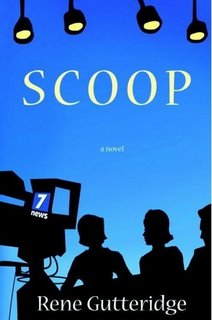 And now back to our regularly scheduled insanity.

Channel 7 news producer Hugo Talley dreams of working with first-class professionals. Instead he’s saddled with a weatherman who can’t admit when he’s wrong, an aging anchorwoman who refuses to release her clawlike grip on the newsdesk, a conscience-stricken reporter who’s reluctant to focus on sensationalism, and a new assistant–former homeschool student Hayden Hazard–who can’t just seem to leave her faith outside the newsroom.

When the Channel News 7 team inadvertently stumbles on a hot news story, Hugo is frantic to exploit this rare opportunity. But a series of crises–including a Botox disaster and the disappearance of a colleague–threatens to destroy his chance for ratings success and send him completely over the edge.

Meanwhile Hayden’s presence is distracting at least two coworkers. Softspoken reporter Ray Duffey isn’t sure whether he’s attracted or frightened by her outspoken faith, while ego-driven Sam Leege is certain her naïve spiritual convictions will fall victim to his persuasive attentions.

With their oddball antics and all-too-real foibles, this lovable cast of characters offers a hilarious look at the sometimes-unexpected effects of taking one’s faith boldly into the workplace.

From page one, I was completely engrossed in the story, the characters, and the plot. This was a very engaging read, with clean humor and yet very insightful emotional themes.

The characters are all very unique and distinct. I liked how the author drew out both the likeable and unlikable aspects of each character to create very 3-dimensional story people.

The setting in the world of news journalism and broadcasting is fascinating, and acts as another character in the story. Even though it was a totally new world for me, I was never confused by what was going on.

Some of the threads tied up a little to quickly and neatly at the end, but it was still a very satisfying ending to the story. I was almost surprised it was done.

What’s interesting about this story is that the heroine isn’t really the protagonist, in a technical sense, because she doesn’t change. However, she acts as the catalyst who changes everyone around her. The story is told from their viewpoints rather than Hayden’s.

I actually thought it was very clever writing to be able to show Hayden’s personality through the other characters’ eyes. I never needed to be in Hayden’s point of view because I knew exactly what she was like, what she was thinking, what her values and ideals were.

I’m looking forward to the other books in this series, starring the other Hazard family siblings in a variety of other interesting occupations.